One down three to go!

Well as you all know I had three other friends who were/are pregnant with me over the past 9 months. Andrea has already had her baby, Adeline, who is so sweet. And the rest of us are waiting patiently...well as patiently as we can! Rebecca has about 2 more weeks and Katie has about three more weeks to go. And then of course Bailey has decided to make us wait! Here's the latest picture of us.

Video Sharing at DropShots.com
Posted by Johnson Journal at 4:13 AM 2 comments:

Bailey's due date came and went! 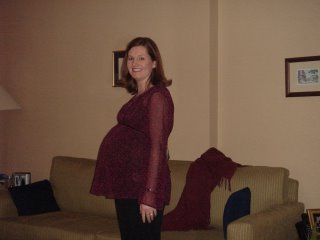 Well we aren't surprised since only 5% of women actually deliver on their due dates. I guess the bright side is if she doesn't come sooner then I only have two more weeks! But we are trying to wait patiently while Bailey takes her time getting into this world! Pray for us as we wait.
Posted by Johnson Journal at 4:12 AM 2 comments:

Well it was 11:25pm on Thursday night when someone knocked on our door. We thought who in the world is coming to see us this late. Come to find out it was a neighbor from the seventh floor. I don't know why we were surprised because Turks stay up really late so to them knocking on a door at 11:30pm is totally normal. Anyway he brought us some Asure pudding. This is a special pudding they are making this month. It has several interesting things in it like - beans, chick peas, apricots, pomegranites, currants, nuts, raisins, sugar, cinnamon etc. and pretty much anything else you want to put in it! It sounds weird with beans and fruit but if you put enough sugar and cinnamon in it then it's really good. Well Billy doesn't like it but I do!

The story behind the pudding is that Noah ate this pudding on the ark. When Noah and his family were getting ready to get on the ark then they put everything they had in a big pot which turned out to be Asure pudding! Well that's the story I heard anyway. We are thankful for our neighbors who thought of us. Pray we would return the same thoughtfulness to open up more opportunities of sharing the Good News with them.

Sorry the picture is sideways!

Video Sharing at DropShots.com
Posted by Johnson Journal at 7:28 AM No comments:

Last Valentine's Day without a Babysitter

Well last night we had our last Valentine's Day without a babysitter for at least the next 12 years or so! We had a wonderful day. We started out by going to the doctor. Everything is fine. She said she didn't think the baby would come in the next day or two. So we will keep waiting. And then we had a romantic time grocery shopping - stocking up before Bailey comes. Then ate chinese at the mall for lunch. Then for dinner we went to a new place to us called Chocolate. It's one of those trendy places to go in Istanbul. My sweet husband brought me some beautiful gerber daisy's and I made him some strawberries dipped in chocolate. We had a wonderful day. But we are looking forward to next year when we have Bailey with us!

Today I met with a friend of mine, Burcin. I've known her almost the whole time I've been in Turkey. She is getting married July 2 so we had lots to talk about between weddings and babies. Pray for her and her fiance, Husnu, as they start on this journey together.

Share Video and Photos at DropShots.com
Posted by Johnson Journal at 1:22 PM 3 comments:

Well since we can't get a King Cake in Istanbul, my friend, Rebecca and I decided to make our own. Rebecca got the "original" recipe off the internet and then we went at it. It is a good thing we started early because it took us all day to make it! There are lots of steps to it so I have a better appreciation for those bakeries that make them all day long during Mardi Gras season! The only thing about our king cake was the colors. It wasn't traditional. I only had red food coloring so the sugar on our cake is red and pink. I guess you can think of it as a Valentine's Day King Cake. Which really wouldn't be a king cake, would it? Anyway, it was fun making and having a little taste of home! And all the people who tasted it, that actually knew what a king cake was (which was a total of 4 people) said it tasted just like the real thing! I'm sure we would give Gambino's a run for their money! To all our dear friends in NOLA - Happy Mardi Gras!

Posted by Johnson Journal at 9:24 AM No comments:

Saturday I got to celebrate my friend Amy's 30th birthday with her and a few other friends. We had a great time. Here are a few pictures of the evening.

Share Video and Photos at DropShots.com
Me and Amy

Share Video and Photos at DropShots.com
Any age can play pin the tail on the donkey!

Share Video and Photos at DropShots.com
Make a wish!

Posted by Johnson Journal at 2:10 AM 2 comments:

Our friends, Jeff and Andrea, just had their baby, Adeline one week ago. She is so cute! She was one week early. I can only hope that Bailey comes one week early! We have enjoyed the past few days of holding her and watching her reactions to this new world. I can only imagine what it will be like with our own. Won't be too long and we will find out. Every time we see her we are just a little jealous because they get to hold their baby now. Billy especially is ready to get his hands on little Bailey. Pray for us as we continue to wait.

Share Video and Photos at DropShots.com
Posted by Johnson Journal at 1:27 AM 2 comments: